Most of us have a fixed run for our chickens and –most– of the time, it’s a little smaller than we would like or it’s a little over stocked for the ground we have. Chickens scratch as they forage and most grass runs will turn into mud in a month or so, even in the warmer months when the grass is growing.

It’s all very well having your birds secured in a predator proof run, but if they don’t have grass to graze or areas to forage, they are missing out.

If you let your hens out into your garden, you can see just how much they love foraging. But this comes at a cost… soil gets scratched onto paths, plants get pecked and scratched up, bowls of dirt appear where hens bathe in their dust baths, not to mention the little packages that are spread far and wide! 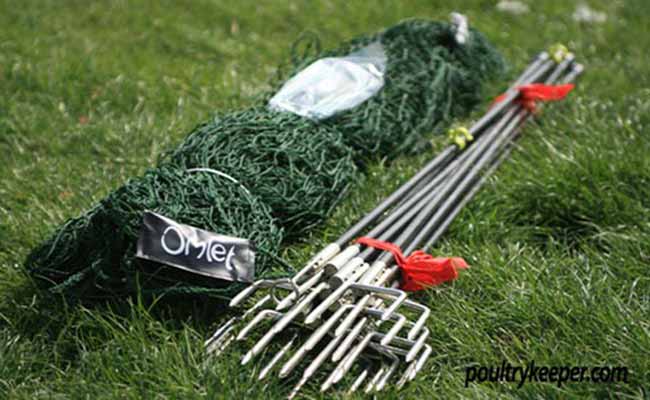 More often than not, we want to keep our chickens in a certain area, or maybe ‘off’ a certain area, such as a vegetable patch or planted area. Until now, the choices have been limited and would often involve a big job. Fencing isn’t easy to move if you want to give your chickens fresh pasture, that is, unless you have an easy to move chicken netting system like this one sold by Omlet!

The Omlet chicken netting kit comes in 3 different sizes 12, 21 and 42 meters long. I tried the 21 meter long version and built a square run with 5.25 meter sides which gave a grazing area of 27.5M2 which I would say would be more than adequate for most small flocks. 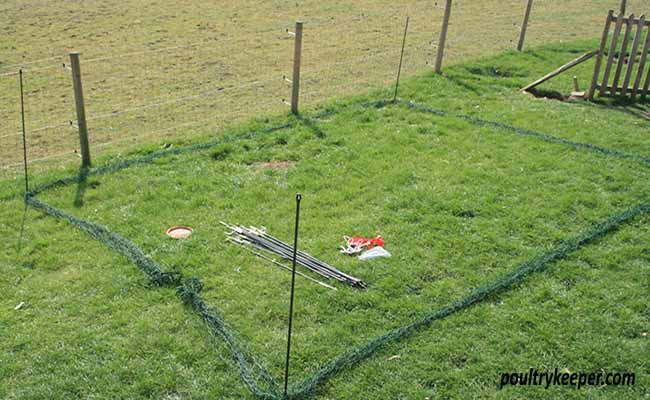 Unpacking the kit, I inspected it and was very pleased to see the height and quality of the netting and poles. Most poultry netting I have seen, (designed to be electrified) has been waist height and whilst fox proof (as Mr. Fox investigates the fence before leaping and gets a shock) doesn’t stop flighty chickens from clearing it with ease if they get startled.

The Omlet chicken netting is made of Polyurethane so will not rot. The colour does blend into the background, as I discovered when trying to take photographs of it! At 1.25M / chest height, it is perfect to keep all but the most flighty of chickens where you want them. The netting has 10cm squares and the lower section (up to knee height) has 5cm squares for added security. 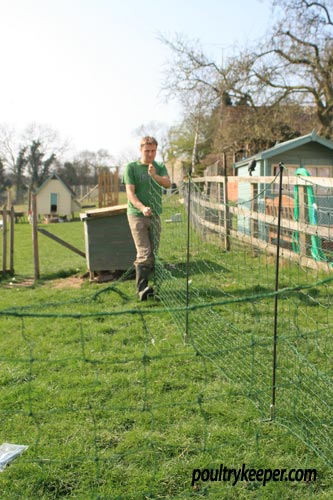 There are 16 poles, that look like something you should be using to spear fish with on a Caribbean island! On the top, there is a slot with a twist in it so that the netting turns through 90 degrees and it holds the netting securely. The bottom of the poles have a pair of spikes that are hooked onto the bottom of the netting to hold it down and then can be pushed into the ground easily using a boot. There is an adequate number of poles and I found as a rough guide, these can be spaced about a poles length apart.

A pack of 28 pegs is provided to secure the bottom of the netting but I would say that once the netting has hung for a day or two and your chickens have settled inside, you shouldn’t need to put too many of these around the bottom if the ground is level without any dips.

The netting comes with an in-built gate. The gate has a metal loop that drops onto a base plate to secure the bottom part of it. Further up the gate, there are plastic clips that secure the middle and upper part. It only takes a few seconds to get through.

I set the netting up for the first time in 30 minutes, however at least half of this time was spent taking photographs of it for this review. I would estimate it should take no more than 15 minutes to set up normally and 10 minutes or less to move.

I read the reviews on the Omlet product page and noticed someone said it was a two person job to set up. I didn’t think so… although I would say moving it would be easier with two people if you don’t want to take it apart. One person could hold the poles and netting whilst the other pushes a pole into the ground. 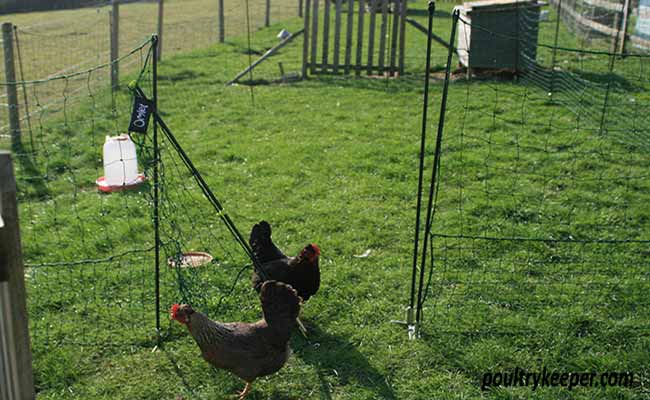 After reaching the end of the netting and having a little spare, I would suggest you start with the gate and work backwards from there so that the size of the run can be adjusted to suit the available length of netting.

Chicken Netting is available from Omlet and at the time of writing costs £99.

The top showing the gate clips and Omlet logo.

The netting secured to the top of the poles.

Going through the gate.

Going through the gate.

The Netting (hard to photograph!)

I was impressed with the design of the netting. Obviously this had been well thought out and presents a fast solution to a number of chicken fencing problems.

There are a number of uses I came up with for the Omlet chicken netting:

There are of course more uses for this sort of chicken netting I’m sure but do keep in mind:

Don’t forget chickens need to get out of the sun and require shelter when it’s wet. They also require access to their nest boxes to lay eggs so keep this in mind when using the netting.

Overall, I was very impressed with the Omlet netting. It has been very well designed and is well priced. It provides a number of fencing solutions for the poultry keeper and can be put up in a very short time.

You can see more information, or buy this netting by visiting this omlet page.

If you have used this chicken netting from Omlet and can provide some feedback, please tell me what you think in the comments below…