Ducklings and Goslings will follow the first moving object they find after hatching. They treat it as their mother. So even if it’s a large man with a big hairy beard, he becomes ‘mum’! Zoe Brodie-James explores this incredible natural phenomena of imprinting in ducks and geese. 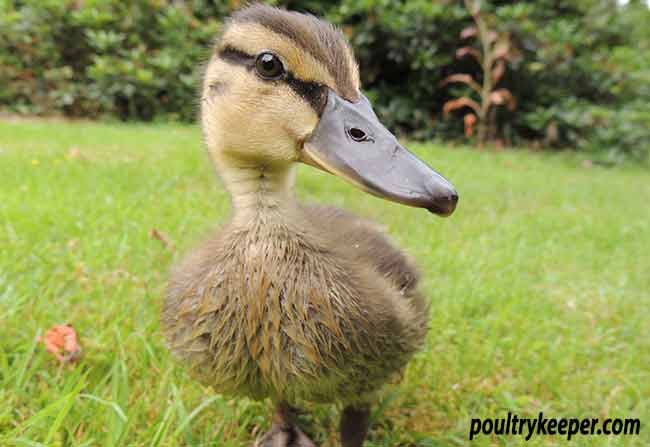 Meet Wayward. Wayward is a wild mallard duckling, pictured here at 3 weeks old. Wayward was found alone at only a day old. For about 5 months a year I take in lots of ducklings, just like Wayward. Some are found alone, some are found in small groups. All have been left behind or lost their way during the arduous trek that their mothers take to lead them to water after the hatch.
Mallards typically have a successful of hatch between 9-16 ducklings. By 2-3 weeks, they usually have only 2-3 left, if they are lucky. Mallard mums often loose some during the first 24 hours. After all, time is of the essence, she can’t hang around for stragglers or inquisitive offspring that don’t follow her determined march to water, often through what must seem like a deadly obstacle course for her tiny day old balls of fluff.

That said, a determined mallard mum being followed by a group of brown and yellow ducklings is a common sight in spring months (often along busy roads accompanied by police escorts).

Ducklings and goslings are termed as nidifugous or precocial, when they hatch, they are ready to go, so to speak unlike altricial species of birds such as songbirds and raptors. At hatch, precocial birds are have large brains, open eyes, are covered in down and are fully mobile (but not flighted). Altricial species can be hatched blind, naked, immobile and reliant on their parents for food. 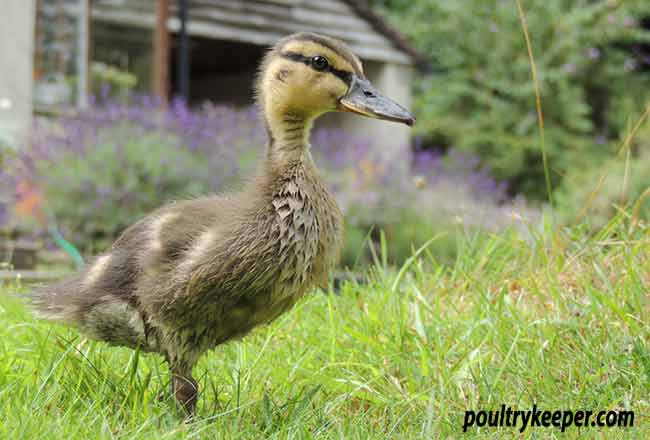 So here you have mother mallard, exhausted and malnourished from 28 days of sitting with a long journey on foot ahead of her and a brood of energetic, inquisitive, very mobile independent ducklings. How on earth does she get them to follow her?

Imprinting was described beautifully by Konrad Lorenz and his flock of graylag geese in the 1930’s.

Lorenz described two types of imprinting in regard to waterfowl. Fillial and sexual. Fillial imprinting describes the process by which the offspring relate to the ‘mother’ figure and sexual imprinting determines who they choose as mating partners later in life.

Fillial imprinting occurs during what is termed a ‘critical or sensitive’ period just after hatching, typically during the first 24-48 hours of life. During this time the duckling will learn to follow its mother who is usually the first large moving creature it sees. The so called ‘critical’ period can also be the period in development prior to the onset of fear of novelty which appears to develop at about day three in ducklings. 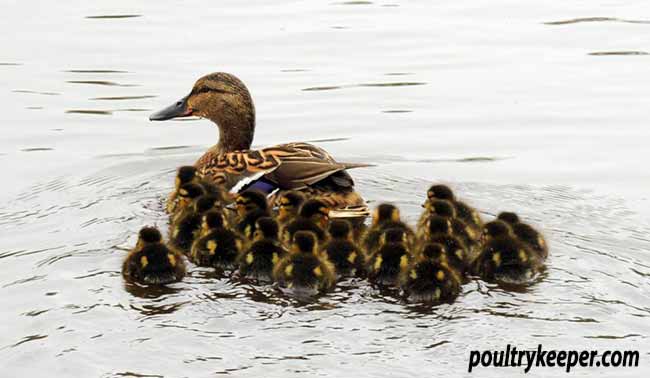 The biological science behind imprinting can get quite complex and later research by Howard Hoffman postulates that the duckling receives stimulation that is comforting when some aspect of the object (for example, its shape or its texture or its motion) has the capacity to innately stimulate the production of endorphins.

So back to Wayward duckling. He was bought to me at no more than 48 hours old. He needed me to provide him with warmth and protection from predators, he is alone in the world, all he has is me.

He spends his days snuggling in his woolly hat, snoozing under his brooder with his teddy bear companion, splashing in the bath or helping me do the gardening on sunny days. He wanders a few feet away from me, then visibly panics and comes scuttling back and stands by my feet. Its all VERY inappropriate, how will he possibly survive in the wild, clearly I am going to need to invest in a duck size handbag for him to reside in for the next 20 years. Or am I? 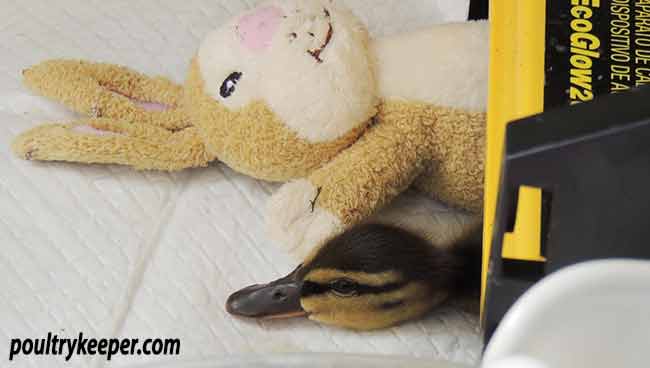 Luckily for me, and for Wayward, he was wild hatched. The first thing he saw was his mum (who I am assuming was a mallard duck). Those first hours in his life were indeed critical. Although he was willing to take warmth and safety from me, given the chance, Wayward would be off stalking any mallard he could get to take notice of him (which on several occasion’s he did, much to the annoyance of the mallards in question).

At three weeks old his desire to follow me was overwhelmed by his desire to be with my adult mallards, as such there was a great deal of me following him instead of him following me in order to keep him from disappearing off onto our lake. Wayward was starting to earn his name. 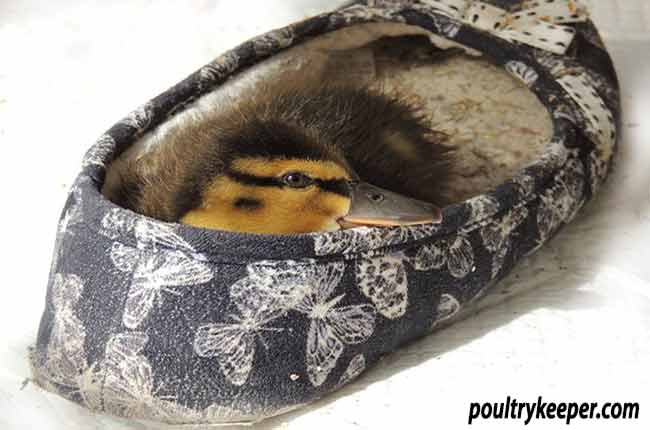 Despite being essentially raised by a human, because a mallard was the first thing Wayward saw when he hatched, he imprinted on it. Wayward left at about 9 weeks old with my resident wild flock of mallards. If I had been the first thing he saw when he hatched, it’s likely he would currently be paddling all over my keyboard demanding attention looking at the wild flock of mallards thinking ‘what on earth are they’.

Various questionable ‘research’ over the years has shown that chicks and ducklings will imprint on just about anything, from a wellington to a light bulb. This can cause some interesting behavioural traits in the future. It can be quite embarrassing in company when your friendly garden mallard comes and flattens herself out at your feet demanding you mate with her and the Muscovy drake you hand reared is humping your wellie-boot.

Generally filial imprinting is reported to be irreversible, however with a lot of time and patience some cases of inappropriate filial imprinting can be manipulated to redirect the bird to associate with a more suitable species.

Sexual imprinting occurs over a longer time period and shapes the choices a bird makes in regard to choosing a mate in the future. In short, it is the formation of sexual preferences that are expressed later in life. It is expressed only at sexual maturity and is shaped by experiences up to that time. This ensures species mate with their own kind, however anecdotal evidence appears to suggest mallards will mate with anything going…

Waterfowl may often choose a mate based on what their ‘parents’ looked like. However this varies depending on whether the youngster is male or female and if the parents show sexual dimorphism. So, while a male mallard duckling will identify his future mate by relating it to the appearance of his mother (or attachment figure), the same does not apply for a female. Some reports suggest female mallards show a preference for whom they have been reared with regardless of plumage (or indeed species). A hand reared drake is quite likely to display sexual behaviour towards both humans and female ducks.

Sexual imprinting appears to be a two stage process where the individual learns the characteristics of it’s parents and siblings, the sexual preference is then stabilized or modified according to the species of individual to which the subject is exposed.

Having wild orphan ducklings of all species, I have had scenarios when two different species of single orphan ducks have been raised together. Fast forward a year and I have a wild tufted duck that shuns its own kind, preferring the company of malllards, they don’t speak the same language but I am sure the language of love will overcome any such barriers, I am expecting some tufty mallard hybrids in the future. 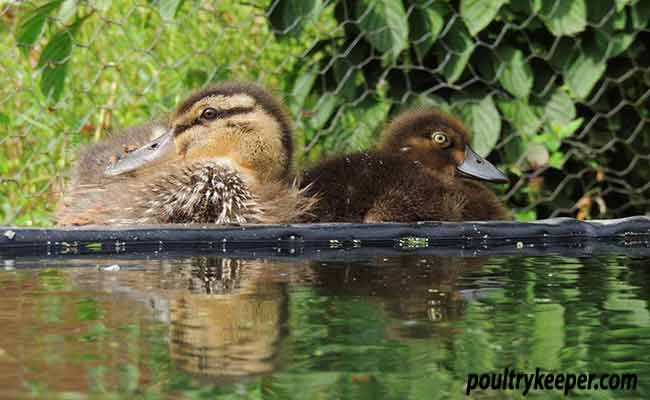 Imprinting is a fascinating and complex behaviour, varying greatly between species. This is by no means a comprehensive guide and further reading is suggested starting with the work of Konrad Lorenz.