I have read with great interest the breeding articles by Stan Simister (Creating a Strain), Derek Alsop’s response and more recently, Robin Ramus’ Federation Interview in Fancy Fowl Magazine UK. I found their advice to be very wise and coming from a wealth of experience in poultry.

The common theme in these articles is “records.” The point is made by all three gents on the importance of well-documented history within your bloodlines, knowing where each bird has come from.

Another significant point is that of selection and the importance of only breeding from the best possible specimens. Robin Ramus emphasized this point in his article and touched on how difficult it can be to eradicate undesirable features once bred into your strain.

Assuming you only breed from specimens that have no faults, it can be disheartening to experience faults emerging in the offspring of your line. Usually these are only a small percentage of birds hatched and can be selected out quite quickly.

When striving for perfection, it can be frustrating to see faults emerge in your stock and we can reasonably deduce that both the male and female(s) in the breeding pen are to blame by carrying unwanted genes. This is often the case. A prime example is when single combs turn up in rose-combed breeds.

However, this is not always the case. The late Dr Clive Carefoot often referred to “Prepotent” males and their uses. In his book, Creative Poultry Breeding, Dr Carefoot has a chapter on Prepotency and describes it as an ability to produce an unusual degree of resemblance in one’s offspring. This means that males of high quality are able to pass on their genes in a way that their sons closely resemble them, whilst also producing high quality daughters.

A group of Light Sussex Growers hatched from a trio originating from Nick Smith’s bloodline.

Dr Carefoot says that the term “Prepotent” is assigned to males in general because their abilities to reproduce are monitored more closely than individual females.

After years of breeding for scientific purposes, I would like to add my own view: I think a lot of it comes down to the fact that males can carry two copies of certain genes, whereas females can only carry one. These are carried on the long sex chromosome and are known as “Sex-linked” genes.

In my view, a Prepotent male will be pure for all the Sex- linked genes, as well as the non- Sex-linked genes, giving him the best chances of producing sons that look the same as him. It is important to note, and I’m sure Dr Carefoot would agree, that the most suitable females must also be used in the breeding pen.

For example, any kind of Silver male must be crossed to its Silver female counterpart to produce sons that look the same as their father. Crossing it to Partridge instead, would split the pureness of the genes (where the term “Split” came from) and throw everything out.

So, when certain faults appear in the offspring from our breeding pens, we can assess whether the male in question is solely to blame, or whether the female(s) also made a contribution. Faults such as dark legs emerging from good yellow-legged breeding birds, point straight to the male. The same is applied to Gold colored birds emerging from Silver lines (as with the dark legs, these will always be female).

The lesson, and for success breeding chickens, the old school breeders know that the male in the breeding pen contributes more to the offspring than the female. Because males have two long sex chromosomes, there are two places for the genes to be correct in order to guarantee them breeding on.

However, in many cases the male is only pure at one of these locations which masks the other one (often called “Splits”). Consequently, a male that looks good doesn’t always do “what it says on the tin.” Females, in general, are a lot more genuine for what they appear to be.

The advice is: choose yours wisely; a good “Prepotent”, pure-breeding male is worth its weight in gold! 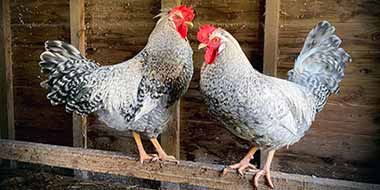 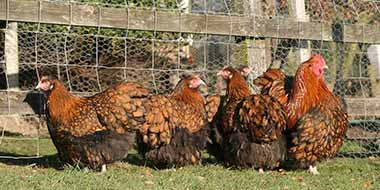 If you are considering breeding chickens for sale or expanding your flock’s size, then one of the most rewarding ways

Making your Own Line of Birds

When assessing your rearing stock and noticing an obvious fault, it can be very disheartening. An otherwise-fine specimen is ruined for

Fixing Specific Traits into your Line

Following on from Making your Own Line of birds, Laurence Beeken looks at how to fix specific traits into your line and how to introduce fresh blood when necessary.

If you are considering breeding chickens for sale or expanding your flock’s size, then one of the most rewarding ways

Around mid-summer, many hens that are kept in a flock with a cockerel start to look bare on their backs 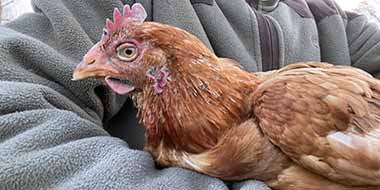 How to Dispatch a Chicken

Euthanasing or killing a chicken is one of the less attractive aspects of raising chickens… Here is how to dispatch a chicken using neck dislocation. 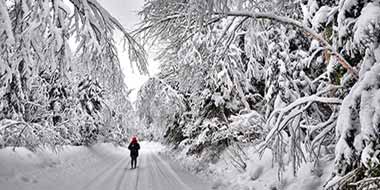 Higgins Rat Ranch Conservation Farm is located in Alberta, Canada. During the winter, the temperature can drop as low as -45°C. Specialist care is, of course, required in these icy winter conditions. 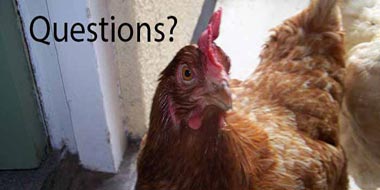 Review of the RCOM 20 Incubator, available in three different models. I tested the RCOM with both chicken and duck eggs, and here’s what I found. 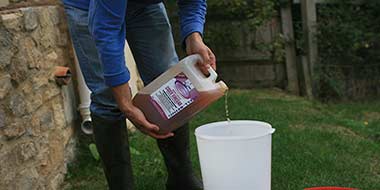 I have been giving Apple Cider Vinegar to my chickens for many years, and combined with good husbandry, I have seen a positive difference in my flock’s health.