December is the Time for Pairing Geese

December is a busy time for most of us. With short days and colder weather, the last thing on my mind is my spring incubation and hatching plans but it is mid December (in Northern Latitudes) that you should start thinking about pairing geese: selecting the right geese for mating next spring. 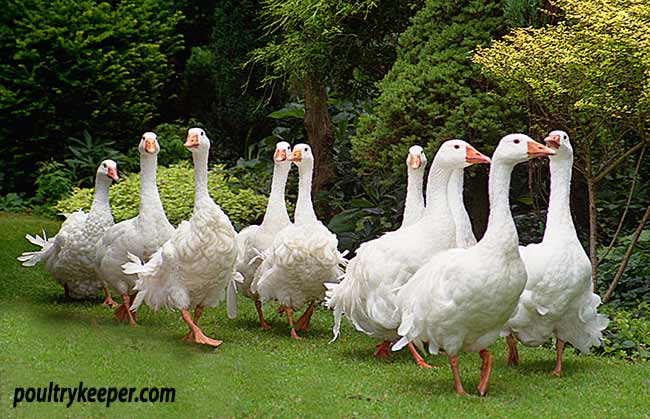 It is common to mate a pair, or a trio of Geese but one gander to three geese is perfectly acceptable amongst heavy weight geese. For the lighter breeds of geese, four, even five geese per gander are possible. Ideally, mating pairs or groups should be complete by mid January so the birds have a chance to get used to one another and their environment.

When a gander has not met the geese before, he will usually take to the group fairly easily. If you are planning on a small flock of geese, rather than a pair, then introducing geese that are not already in a group can be problematic. It is better to get the females together, before introducing the gander.

When introducing chickens, it is often best to allow as much space as possible so the bird that is lower in the pecking order can escape but the reverse seems to be true of geese. Removing the gander and confining geese in a small area seems to help the females bond. They don’t fight as much as when having a larger area to roam and after a couple of weeks, they can usually be released to roam as a group together. Finally, the gander can be introduced to the group and he should accept them all as his ‘wives’ and mate with them all.

First year matings are not always that fertile and if they are, they can be difficult to hatch or a little weak as goslings. First year ganders will mate less than second year ganders which can be another reason for lower fertility. More success can usually be had if an older gander is used with first year geese. Do not give up with young ganders though, from their second year onwards, they will usually be vastly improved.

If you have a large number of geese and decide to flock mate them, ganders may fight from time to time but shouldn’t cause too much damage to one another providing they are a similar match for one another. There will usually be less fighting if the ganders in the flock have been raised together.

Geese usually prefer to mate on water. Although most people say that it isn’t necessary for geese to have swimming facilities, the fertility of the heavier breeds is better if water deep enough to swim is provided during the breeding season. Water deep enough to bathe in will help to keep the geese clean which also keeps the eggs they lay clean.

Those last few days were so exciting: would we get goslings? I was driving my Belgian friend mad with my

Those last few days were so exciting: would we get goslings? I was driving my Belgian friend mad with my