Before getting some ducks for the back garden, many people ask how noisy they are going to be. Many of us have neighbours to consider and just like a crowing cockerel can be a problem, some ducks can make quite a bit of noise. 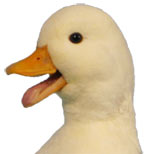 The noise ducks make really depends on the breed and the number of ducks you plan to keep as well as the time of year (considering the breeding season for example). Call ducks, even though very small, as their name suggests are the noisiest. Other bantam and light ducks are fairly quiet most of the time and when they do quack, it is usually quite quietly. Ducks are by no way as loud as a cockerel crowing though which as well as loud is piercing due to the high frequency of the crow.

Personally, I would say the main factor to consider as far as neighbours are concerned is the time at which the noise is being made. Many people don’t mind some noise during the daytime so if you keep your ducks housed until people are awake, most people will be reasonably tolerant of a little noise.

So – Are Ducks Noisy? – Personally, I would say no. In comparison to chickens they aren’t. When they do make louder quacking noises, it isn’t as loud as a cockerel and it isn’t as shrill – but most of all, not likely to be a 4am.