There are two species of quail that are commonly kept in the U.K. The Chinese painted quail is popular in aviaries and is the smaller of the two, but the Coturnix or Japanese quail (shown below on the right) is more popular for producing eggs or meat with smallholders and back garden poultry keepers. 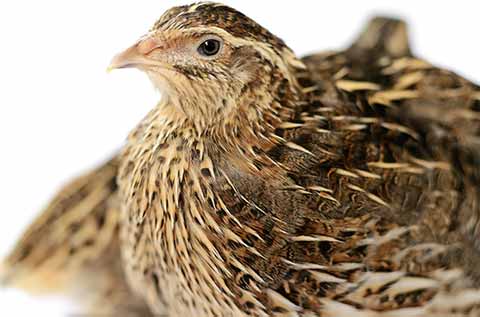 Quail can be very productive laying around 230 eggs per year so are an ideal solution for people with small back gardens that are unsuitable for chickens. They are however more nervous than other poultry and do not like being handled so care must be taken when catching them because they are able to fly vertically upwards to escape capture. Quail will get used to you though and mine will call between themselves when approached, looking to see if I am bringing them something tasty to eat!

Rats are a real problem to quail and one of the first things you should consider when thinking about keeping quail as pets is their security in runs and housing. Ventilation in housing is also important since quail droppings produce far more ammonia than other poultry.

Quail can be kept with or without a run as long as they are provided with a little grass or other greens in their diet. It’s probably best to start by converting housing you already have, ensuring it has adequate ventilation, or to buy a rabbit hutch. Rabbit hutches are usually big enough for half a dozen quail and provide adequate ventilation and a place for them to hide to lay eggs.

Chicken’s housing is wasted on quail. They don’t need such elaborate nest boxes although they will appreciate somewhere dark to lay. Quail don’t always make nests; they will usually lay their eggs in discreet places in their bedding. Perches are also wasted on quail and most coops are raised off the ground, which is also a problem.

In their run, quail prefer a habitat much closer to that of a pheasant than a chicken. Their natural habitat provides them with places to nest and hide and it helps if you can replicate this with cut conifer branches or similar for cover and a few small logs raised off the ground by a couple of bricks for them to hide under or behind. 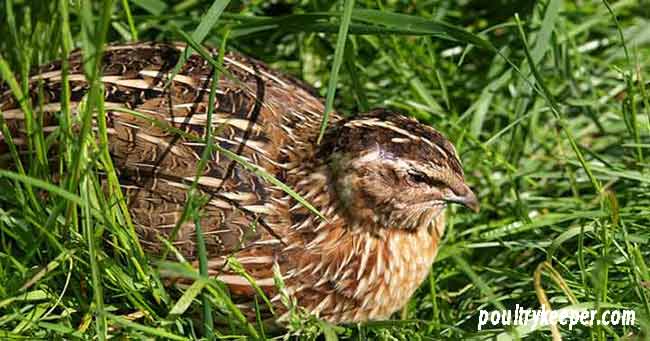 Quail need more protection during the colder winter months (when the temperature is approaching freezing or below). Some people will move their accommodation into a garden shed or garage but I haven’t had any problems keeping mine outside in a sheltered position, using an extra few inches of bedding material to keep them well insulated from the floor and shut in their house on cold or wet days. As with any animals, wet and draughts will cause problems so although they require good ventilation, it may be necessary to cover these if there are strong winds. I have done this using an old sack in the past so it need not be elaborate.

Quail like to spend their time on the ground and are not keen on climbing so will not use a ramp to get into their house. Housing must be close to the ground. If their house is too close to the ground, rats can burrow underneath so a compromise must be reached, or a concrete floor used under the house. I have had success with a house raised around 4 inches off the ground using a shallow, wide ramp for them to use to get in through the pop hole.

When startled, quail are capable of flying vertically. For this reason, runs must be covered to contain them. When getting close to quail for cleaning or other chores, it helps to move slowly, allowing them to scurry off elsewhere. If startled, there is a risk of them damaging their heads on the roof of their house or worse still, on the unforgiving wire of a run. A fruit net or other soft material can be stretched across the run, just below the roof to soften the blow for their Harrier Jump Jet impressions.

Runs should also have boards around the bottom edge around 6 inches high for the same reason. Other pets such as dogs and cats should be watched carefully at first. We haven’t had a problem, our cats and dogs have ignored them and our quail have been fairly relaxed near them but I have heard stories of dogs getting excited and startling quail causing them unnecessary stress.

Pet quail do not over-eat so can be fed ad-lib. They should be fed different feeds according to their age:

Young quail can be fed a high protein starter crumb. Whilst specialist feeds don’t usually exist specifically for quail, a non-medicated turkey starter crumb is ideal for them because it is higher in protein than chick crumb.

From 5-6 weeks of age they should be changed over to a grower/finisher ration, again a turkey feed comes to the rescue in providing the correct protein level for Quail.

By 10 weeks of age, quail that are being kept for their eggs or breeding require a breeders feed which contains 18-20% protein.  Some specialist quail feeds contain seeds as well as pellets. Adult quail eat around 15g of food per day.

Green foods should be provided so collect grass and other leafy greens for them.

There is more information on quail feed in this article.

As well as being entertaining to watch, my pet quail have been very productive in the egg department. They are capable of laying around 230 eggs (some have laid up to 300) if kept in the right conditions, given some light during the shorter days and adequate protection from the cold over the winter. 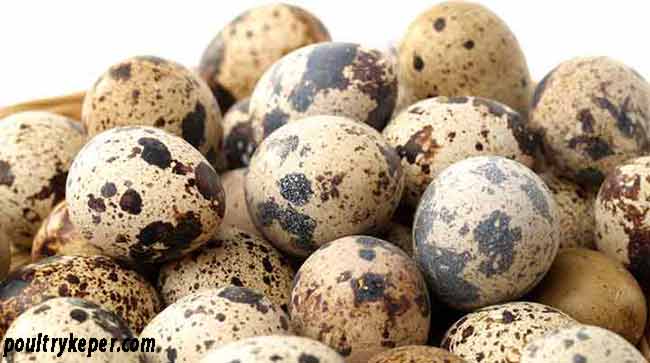 Quail start to lay eggs at just 8-12 weeks (assuming there is enough daylight) so they are productive very quickly compared to chickens.

Four quail eggs are roughly the same as a chicken egg, although they have a slightly higher quantity of yolk to white in an egg. I have written a separate article on quail eggs, since there is quite a lot to say about them.

If you get too many quail eggs, they can be pickled easily and stored for use at a later date. You can see my pickled quail egg recipe here.

Quail lay well for the first year and often the second and although most books suggest they will live for only 2 years, I have found mine to last 3-4 years. Maybe it’s down to good husbandry, I would like to think so!

Males are notoriously difficult to sex when young but the males will start to call as they mature, identifying themselves. Male Coturnix have reddish-brown chest feathers from the age of 3 weeks and when mature produce ‘foam balls’ to indicate fertility. These are a urinary product produced by cloacal glands. Many supermarket and farm eggs are fertile as a result of this difficulty. Some poultry keepers have incubated supermarket eggs (for 17 days) and they have hatched! You can read more about breeding and hatching in my article on Breeding Quail here.

Quail are prone to becoming ‘bored’ in their enclosure and of course cannot be let out to free range like other poultry thanks to their ability to fly short distances. If you can provide a run with logs to climb on, and objects for them to go under (for example, a piece of wood resting on bricks) to provide them with things to do, it will help. An area to take a dust bath is a ‘must have’ and they will spend many hours cleaning themselves in this.

Feather pecking can occur if quail get bored but also if the birds are low in protein. Feathers are made up mainly of protein which is why birds will eat them. Check their feed contains sufficient protein (see the article on feeding quail for more information). Quail can also over-preen (which looks like feather pecking) if they have lice. Treatment for lice is the same as for chickens.