Jeremy Hobson, author of Success With Chickens, tries to uncover the truth (or otherwise) behind some long-held chicken health myths and potions.

Many chicken keepers and gamekeepers of my generation will have been told of, or perhaps even seen it done, the cure for an infestation of gapeworms in young birds, particularly gamebirds.

Basically, a strong feather was first found, perhaps pulled from the flight feathers of the unfortunate chicken itself. The feather was then stripped of almost all of the barbs, leaving just a few at the end in the manner of bristles on a brush. Next, it was inserted down the poor bird’s throat (sometimes with the addition of some noxious fluid) and twisted the same way all the time before being withdrawn. The corkscrew action of the movement collected and removed many of the gapeworms living in the windpipe.

It has to be said that, looking at the worms it brought with it, the method worked reasonably well, but one could obviously not tell what actual percentage of gapeworm numbers had been removed and what remained – and at what cost stress-wise to the bird? It is definitely not recommended. For any type of worming problem it is nowadays far more effective to use something like Flubenvet 1% 60 gram packs which, despite the restrictions imposed by the Veterinary Medicines Act, can still be legally obtained and administered in the food.

Heaven protect any birds suffering from diarrhoea in the old days! Not content with the fact that they were already suffering from loose bowels, the accepted treatment was to make the matter worse by dosing them up with castor oil and then administering pills containing opium, chalk and cayenne pepper. Diarrhoea is, of course, generally a sign of other problems rather than being one in itself and the bird’s overall demeanour and appearance should be watched carefully for symptoms that might indicate a specific disease.

Still at the same end of the bird is the problem and solution regarding what to do about a hen which is egg-bound. In recent books, you will find mention made of steam from the kettle being used around the vent region, but in Edwardian times, the wording was more euphemistic – to whit; “apply a hot vapour bath to the parts. A wide-mouthed bottle or earthenware jar, with some scalded bran in it, will also answer the purpose.”

Stockholm tar featured in many remedies and even in my youth, it would have been unusual not to have gone into a poultry keeper’s shed and not seen a yellow-coloured tin of the stuff alongside a bag of Karswood Poultry Spice and a dusting can of Cooper’s Louse Powder. Stockholm tar was perhaps, most commonly used to treat wounds, and damage caused by feather-pecking. 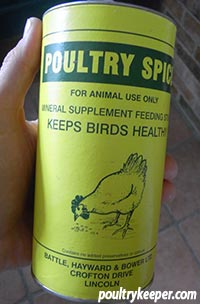 The Karswood Company claimed that their reputedly harmless and health-giving Poultry Spice (which, incidentally, supposedly contained ground insects) was used regularly by 500,000 poultry keepers and sold by 15,000 poultry food dealers – and yes, in the 1960s, I was one of the half million who bought their magical spice from their local suppliers! I suspect that Karswood may have been well ahead of their time as, although that particular company is no longer in existence, it is still possible to buy organic poultry spices from your local agricultural outlet or via the internet.

As to Cooper’s Louse Powder – what an outcry there was amongst chicken and pigeon fanciers there was when that was taken off the market. It worked really well and was a regular part of the hen house cleaning regime. A little dusted regularly under the wings and around the vent area was a sure-fire way of eradicating fleas and mites and what matter that its main ingredient was DDT?

It is interesting to reflect that Cooper’s animal and bird louse powder developed as a result of the company producing a product that was originally intended to eradicate lice in the blankets of war-time servicemen!

Proven, yet natural remedies and preventions are of course, perhaps what we should all be striving towards. Many antibiotics leave residual effects in the body – having said that, if your veterinary surgeon suggests such a course of action in order to deal with an immediate problem, their recommendations should be followed and, more importantly, followed to the letter – if a course of antibiotic treatment says, for example, five days, then that is what should be done: a bird might look to be fully recovered before then, but for the programme to have full effect, it is necessary to complete the full treatment. 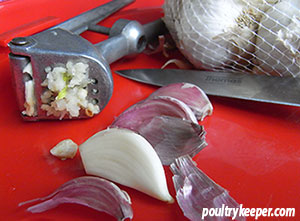 Herbal alternatives are many. At the top of the list when it comes to poultry care, will most likely be garlic. Incidentally, throughout France both table and laying stock have regularly been given access to woodland or hedgerows where there is likely to be a large variety of naturally occurring plants, many of which are considered beneficial as both a means of self-medication and as providers of extra minerals.

Continual ‘grazing’ on plants such as wild garlic might, I suppose, have tainted the eggs, but as far as the meat-producing birds were concerned, it and other wild herbs would no doubt have imparted a very subtle and welcome flavour. Garlic is known to kill only pathogenic (i.e. ‘bad’) bacteria and not the more positive lactobacillus types; it has antiviral effects and acts as an appetite enhancer and an aid to digestion.

Granules can be bought as a feed supplement and, nowadays, in scientifically recommended dosages, but even as far back as the 1960s, my grandfather was adding a little of his ‘secret’ garlic extraction liquid to the water in his poultry yard on a daily basis.

He also was a great believer in sprinkling lime on the ground in order to combat disease. I’m sorry Granddad, but, although much is made of its inclusion where modern-day poultry keeping is concerned, as far as I’m aware, it only ever acts as a neutralising agent to acidic soil and will not necessarily eradicate any unwanted pathogens, but it can destroy worm eggs which is one benefit. Creating a good Ph level will, however, help grass growth within a chicken run, especially if one has the space and opportunity to organise at least two wired enclosures from a central poultry house and it is therefore possible that one can be ‘rested’ in order to recuperate.

Sanitising powders are popular these days which reduce moisture and oxygen and make it difficult for worm eggs to develop. Their main ingredient is lime.
The following two tabs change content below.