In this article, I look at how to feed newly hatched chicks when there is no broody hen to take care of them and I provide some ideas on what you can feed them in an emergency if you run out of chick crumbs. 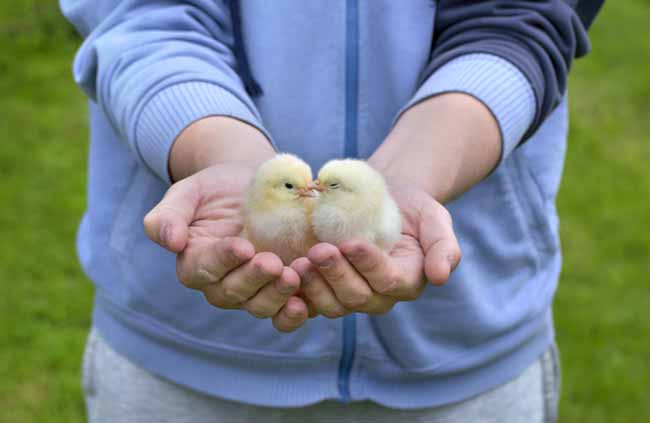 Mother nature is marvellous: when a chick hatches, it can survive for 48 hours without food or water. She has thought about chicks that hatch early in the nest. Just before they hatch, the yolk is absorbed and provides them with enough nutrients until their brothers and sisters have also arrived and mum can take them to food and water.

This is how commercially, chicks can be shipped through the postal system (also, a common occurrence in the U.S. where hatcheries supply chicks by post). This isn’t unkind in any way providing they are kept warm and have sufficient ventilation although there are some studies that have suggested chicks are less stressed if they can eat within 24 hours of hatching.

Chicks have a natural instinct to peck as soon as they are dried out and on their feet. The first thing I do though when adding them to the brooder is dip their beaks under water for a second until they gulp. This teaches them where the water is and forces them to have that first gulp of water which stimulates their appetite. 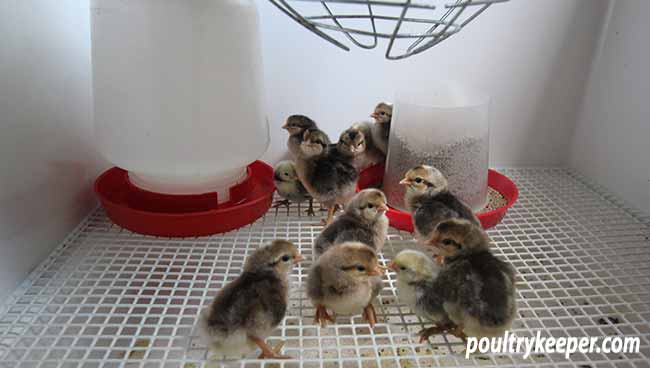 I make sure the water is available just on the edge of the heat lamp until they are a few days old at least and know where to find their food.

Food is supplied in a small hopper. A commercially formulated chick crumb should be fed from day old to around 5 or 6 weeks of age. I normally use Fancy Feeds chick crumbs but there are a number of others available. These crumbs are high in protein, to promote growth and also contain processed grains, vitamins and minerals. Some chick crumbs are medicated and contain a coccidiostat to prevent coccidiosis.

Personally, I never use medicated feeds, but they can be useful in warm / humid conditions or if you’re brooding a lot of batches of chicks in the same brooder. If you keep bedding dry and clean well in between batches, you should minimise problems. There is also some resistance to medicated feeds so their effectiveness is being called into question. Don’t ever feed medicated chick crumbs  to waterfowl, they consume too much and as a result overdose and start to go off their feet and eventually die.

If you don’t have chick crumbs, never feed layers pellets. These are high in calcium (for egg shells) and can damage a chick’s kidneys. As an emergency feed, mashed hard-boiled eggs are the best choice. This is what was fed in days gone by before formulated feeds were developed. 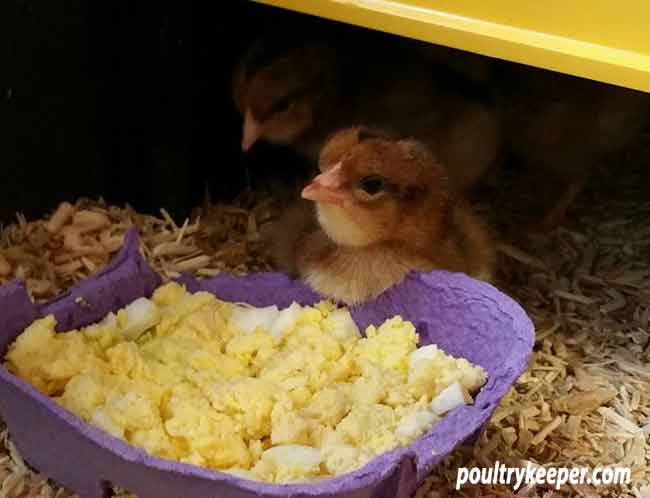 Chicks pop out from underneath a Brinsea Ecoglow Brooder to eat hard-boiled egg.
Photo courtesy of Simon Pickles.

If you don’t have eggs (in a real, real emergency!) mixed corn, ground with a pestle and mortar can be used but this doesn’t contain sufficient protein, vitamins or minerals and is high in calories, so only use this mixture for a very short time until you can get more chick crumbs or hard-boiled eggs. When feeding grains like this, chick grit is required for digestion so the hard-boiled egg option is really the best short term feed for chicks.

As your chicks grow, they will consume more and more crumb. By 5 weeks of age, you will need to start changing them over to a growers pellet by gradually mixing them in with the crumbs.

By 6 weeks of age, chicks should only be eating growers pellets. These are lower in protein and you can read about feeding growers in my next post!

One Response to "Feeding Chicks"