The Hook Bill is now a seriously endangered rare breed. Sadly, it is thought that many colours have already been lost. The White variety is having great difficulty surviving. Hook Bill ducks have a history of more than 400 years, making them the oldest Domestic Waterfowl breed in Europe.

Even Charles Darwin described Hook Bills in his books and kept them on his pond, yet their popularity has declined dramatically recently and there is now only an estimated 250 – 400 Hook Bill Ducks left in Europe.

What can you do?

This is a call for help.

There are no known breed clubs for the Hook Bill, however, in an effort to preserve this breed, the Hook Billed Ducks Program has been set up. Based in Holland, this organisation aims to keep a register of breeders, blood lines, varieties and remaining numbers. The register currently covers The Netherlands, UK, Germany and Belgium but other breeders around the World are encouraged to make contact with the organisation.

They are currently working on a dedicated website (in 4 different languages) to provide an online registration program for breeders so they can check their bloodlines, destiny, inbreeding, line breeding, whom to contact best for fresh bloodlines and so on.

The Dusky Blue was developed as an natural mutation bred between Dusky and White by Edgar de Poel. If there where four ducklings born two would be Dusky, one would be Dusky Blue and one would be “Dirty White”. Be aware that Dusky Hook Bill ducks carry genes for the colour White! This Bibbed Blue Dusky duck (the duckling to the left is 8 weeks old) was then again developed again recently between a Dusky Blue and an Bibbed Dusky. Once again a natural mutation which was incidentally bred by three different breeders at the same time in 2009 and 2010. This colour used to exist before and has recently made a come back in The Netherlands. They are still breeding more Bibbed Dusky Blue Hooked Bills as they want bring them into a show in 2011 for recognition. 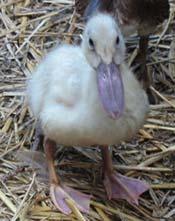 Another colour which seems to have made a come back is what the Dutch call “Dirty White”, these White Ducks have a “veil of grey” over the white and their bill is not pink but has grey spots on it.

They call them “Dirty White” in Holland because it looks like a dirty white duck which urgently needs to get a bath.

As you can see on this picture this duckling should be beautiful yellow, but it isn’t and his Bill isn’t beautiful pink. The photo below shows some rare White Hook Bills.