A range of parasitic worms are frequently found in backyard chickens and over the years, I have always been a strong advocate of having a regular worming regime to ensure they don’t take a hold.

The damage caused by some species of worm can be significant, so to write an article asking whether we should be worming chickens routinely is a bold step, but if you read on, I hope you will gain some insight as to why I am asking this question.

There are many articles and books on managing backyard poultry that discuss regular / routine worming. Pharmaceutical companies that produce anthelmintics (wormers) also promote regular worming and indeed articles on this website too, however after researching and writing an article on the dangers of antibiotic resistance, I started to wonder about wormers and whether the same resistance principle could be applied.

So what is drug resistance?

So, in the case of a wormer, drug resistance could be described as a ‘worms that are resistant to the wormer’ or the wormer becoming increasingly less effective with future generations. In most cases in the UK, this would be Flubenvet since it has been the only licensed wormer available for many years.

Although a wormer may be tested and claim to kill all known worms, in reality there will be a very small number left (Permin & Hansen 1998) in some birds after the course of treatment. Through this simple genetic selection, these worms can survive to continue reproducing and their resistance genes are passed on. With regular use of the same drug, the beneficial effect is lost and the resistance problem continues to get worse…

Having performed a few searches on the internet, I discovered that there is indeed an impending ‘crisis’ of drug resistance and many agricultural and governmental agencies have been expressing their concerns. In the UK, the Medicine Group of the British Veterinary Association (BVA) provided guidance on the responsible use of antimicrobials: antibiotics, coccidiostats and anthelmintics (wormers) suggesting that these should only be used when necessary so I’m starting to think that ‘routine worming’ should really be avoided!

So, the question of whether or not you should be worming your chickens can be answered with another question: Do your chickens carry enough worms to warrant worming? And if the answer is yes, then I believe it is deemed necessary to use a licensed product (Flubenvet in the UK).

How to tell if your chickens have worms.

There is fortunately an easy solution: A faecal egg count analysis can be performed in a veterinary lab. This used to be a trip to a vets then a return trip with the samples and something like a £50 bill but not any more! 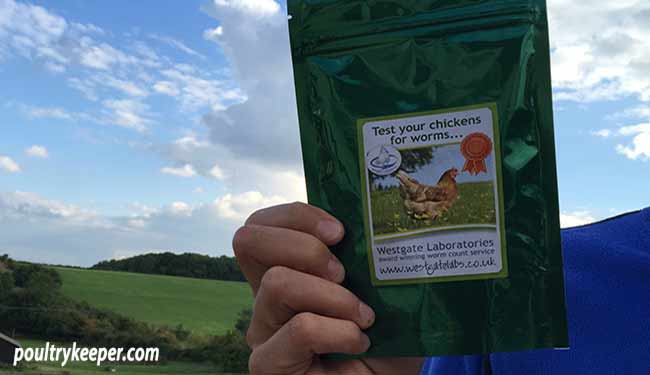 You can buy a postal worm egg count kit now for just £15 (far cheaper than most wormers) and send off the samples to receive results back a day later.

The results will tell you if your birds are carrying enough worms to warrant worming. If this is the case, you can treat them with Flubenvet, but in most cases, (especially if they are on ground that hasn’t been over used), you will find they are ‘in the clear’ so you can avoid unnecessary treatment.

Results of my worm count – no eggs were detected, so I won’t be needing the Flubenvet this time!

Avoiding treatment unless it’s necessary will not only help the drug resistance problem but you can also avoid putting chemicals inside the bodies of the girls that produce eggs for you!

So, going forwards, I’m going to try keeping my birds worm free by using Verm-X and when I would have previously used a wormer, test my hens for worms using a worm egg count kit and believe now that you might actually be causing longer-term problems with routine worming.

You can test your chickens for worms using a postal faecal egg count kit like this one from Westgate Labs.

Monitoring the results of this test will allow you to avoid frequent and repeated use of a wormer which will help to prevent the build up of drug resistance in your chickens. An organic product such as Verm-X may also help to keep them worm free.

I look forward to your comments and feedback below – Will you also follow the same approach?

One Response to "Should You Worm Chickens?"