As rare as hens teeth” is a saying that most of us have heard at some point. Well the closest thing you can get to hens teeth is insoluble grit that chickens and other poultry use to grind down their food in their gizzard and is essential for hens to be healthy.

There are essentially two different types of poultry grit available: Insoluble or Flint grit (show right) and soluble grit (usually crushed Oyster Shell) but do you know what each is used for in a hens body and whether you should be supplying them to your hens? 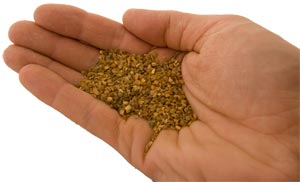 Flint grit or insoluble grit passes through the bird to the gizzard and is used to grind down food so that it is more easily digested. This grit has to be a suitable size for the size of the bird. Grit that is too small will simply pass straight through the bird and will not help the bird at all so it is worth checking that the grit you are buying is for the correct age of bird. Grit is usually classed as chick, grower, layer and turkey. It is better to feed a grit that is slightly too big than too small.

Chickens can pick up grit whilst foraging. If you keep your chickens truly ‘free range’ then they will find enough of this on their own but most of us struggle for the space to be able to do this whilst providing security from foxes. Flint grit is really not expensive and a bag will last a long time so it’s a good idea to provide this anyway for hens, even if they get lots of freedom to roam. 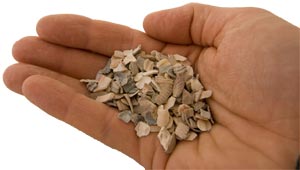 The second type of grit you can buy is known as soluble grit or Oyster shell grit. This is usually ground up Oyster shells but can also be Cockle shells or limestone.

Since egg shells are also mainly made up of calcium, it is also possible to grind up egg shells and feed them back to the birds. Oyster shell grit is larger than flint grit as you can see here and it dissolves in the digestive system, providing the bird with sufficient calcium to produce strong bones and good strong egg shells.

Modern poultry laying feeds usually contain sufficient calcium however there is no harm in providing some additional calcium in this way, especially if you like to provide some of your hens ration as household leftovers (mixed with layers mash ideally) in which the amount of calcium they are getting varies.

Poultry grit can be found for sale online here.

Birds that free range will usually pick up enough insoluble grit from the ground however not all types of ground contain the right sort of grit and there is no harm in providing additional grit for birds to take if they need it. 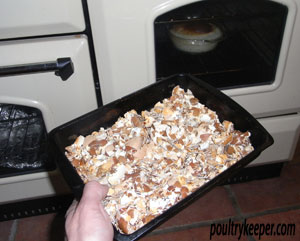 As an alternative to Oystershell grit, you can bake crushed egg shells in the oven for 5 to 10 minutes until they are crisp.

Some poultry keepers will add a handful of grit in with their bird’s feed but it is usually better to give grit to birds in a specially made hopper on an ad-lib basis. If mixed with feed, birds will usually flick it out to get to their food and you will suffer with more waste in this way.

Soluble and insoluble grit can be mixed together though and you will sometimes find it is sold like this in a mixed bag. 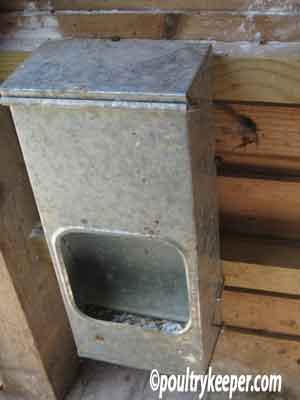 You can buy galvanised grit hoppers, like the one shown here, however a cheaper solution is a plant pot buried in the ground will do a good enough job as a grit hopper if you’re on a budget.

As long as it can drain freely, it can stand out in the wet unlike poultry food. A peg in the bottom to hold it down stops it from being tipped out everywhere.

Occasionally muck gets into the top of it but this isn’t difficult to keep clean if you simply pick it out from time to time.

Do you have another way to give grit to poultry or do you make your own? Please let me know if you do in the comment section below if you do.

2 Responses to "The Types of Poultry Grit"