Jeremy Hobson describes the fun and pleasure these wonderful little birds have given him over the years – and suggests that you will be captivated too! 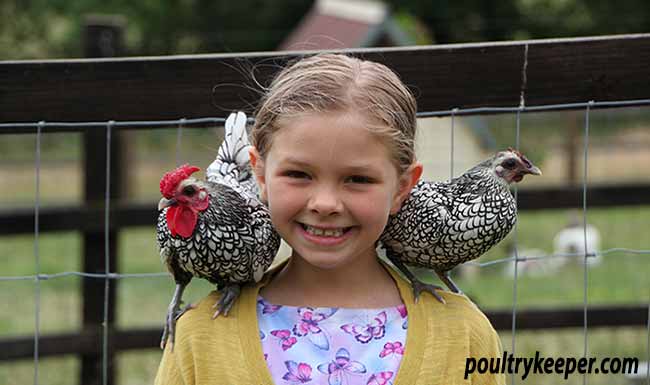 Writing this particular feature is nothing but pure indulgence. As is often said, ‘there’s nothing like your first true love’ and, long before this not-so-young man’s fancy had turned to thoughts of the opposite sex all those years ago, I was well and truly in love with bantams.

And how can anyone not be? As was once written way back in the 1800s, “These gems of beauty and most reassured and prettiest of pets are, certainly, the most impudent, as well as diminutive, of our domestic poultry. They are ridiculously consequential, and seem as if they pride themselves on their captivating appearance.” 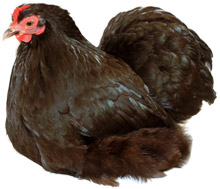 I couldn’t have put it better myself. Although all chickens are charming, bantams are most definitely charismatic and, were they human, they’d be the sort of person you’d want to invite to a dinner party as you know there would never be a dull moment. Some of the lighter breeds are, it must be admitted, a little flighty (so you need to be careful that they cannot escape into next-door’s garden where their antics might not be so well received), but the heavier types bustle about the place in a most inquisitive way. They will follow you around telling you all about their day and, should you tell them about yours, will stand politely with their heads cocked to one side and listen most intently.

A bantam cock is like a terrier dog in that neither of them seems daunted by anything that life puts in their path. A terrier will square up to a Great Dane with no thought other than the fact that he is, in his own mind, just as big, and bantams seem to be afflicted by exactly the same tenaciousness – they will stand proudly on your lawn and defy anything and anyone to stand up to them. As far as their relationship with humans is concerned, they are quite likely to back down very quickly in return for a bit of TLC and a few chicken-friendly tit-bits, but even so, it is no wonder that there is a ‘bantam-weight’ boxing class, or that someone might say of an unfortunate brawl that “he fought like a bantam cock.” 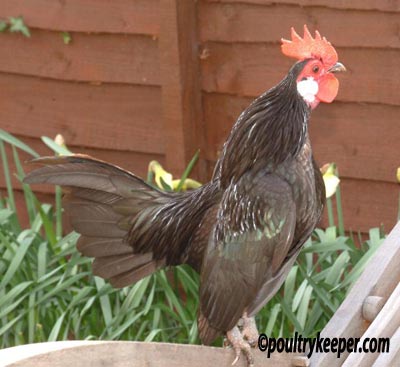 The best things come in small packages, they say. Well, that’s certainly true of bantams – but what exactly is a ‘bantam’? The generally accepted definition distinguishes between ‘true’ bantams (for which there is no large breed counterpart) and ‘miniaturized’ or ‘diminutive’ fowl which are anywhere between one quarter and one fifth of the size of their large breed equivalent. Examples of ‘true’ bantams include Sebrights‘, Rosecombs’, Dutch and Pekins‘. As to the birds that have been miniaturized over the years, one only needs to think of almost all of the standard large fowl breeds.

Interestingly the creation of bantam types quite often had little in common with the way that their large fowl counterparts had originated. Obviously breeders had to start their ‘bantamizing’ programme by using the smaller specimens of existing chicken breeds, but then added the genes and blood lines of other types not present in the make-up of the original large fowl. Frequently, a bantam version of a breed was developed in a totally different country to where the original chicken began life – the Rhode Island Red is a good example as, although the large fowl comes from America, the bantam type was created by European enthusiasts. There is also often a considerable difference in timescale between when large fowl breeds and their bantam counterparts were standardized.

Several bantam types didn’t come into existence until the early part of the 20th century but even so, it was the Victorian love for anything different which set the trend. Fanciers of the time appreciated bantams for their utilitarian properties, as well as the fact that they required very little space and could, therefore, be kept in small gardens. They were also very much in vogue with the aristocracy, who loved their fine plumage and petite appearance. The Victorians weren’t wrong; bantam chickens can be kept in small places and some breeds will lay almost as many eggs in a season as do their big cousins. As to what bantam breed might best suit your particular situation, well, it depends on just that – your particular situation.

If you want eggs, do as you would when choosing one of the large breeds and go for Rhode Island Red, Light Sussex or White Wyandotte (there are obviously other variations of Sussex and Wyandotte, but it is generally accepted that the Light and White lay the most); if you want a particularly pretty bird that will enhance your garden then a pen of Sebrights will take up very little room and are guaranteed to strut around doing their stuff. Should a perfect pet for the children be required, then look no further than the aforementioned Pekin – possibly the most attractive and docile bantam it is possible to know. As to the numbers of eggs it is likely to lay, it is, in common with most ‘exhibition’ breeds, not all that brilliant a layer. On the plus side though, they are superb sitters and mothers so you should, almost always, have at least one of your pen of birds that will go broody and can be used to sit the eggs of the others.

Talking of broody bantams, the heavier, dual-purpose or utilitarian breeds are perfect for natural hatching. In the past, gamekeepers always preferred them to sit their game-bird eggs as they are generally less clumsy and, therefore, less likely to break the small eggs laid by pheasants and partridge. Several exhibitors of the lighter, flightier sorts of fowl keep a pen of bantams to use purely as sitting hens for clutches of eggs coming from their main interest breeds which are not, for a variety of reasons, likely either to go broody themselves, or make poor mothers when they do. Occasionally, these bantams will be Silkie crosses; the reason a cross-breed is preferred being that, while they have all the superb mothering tendencies of the Silkie; due to the cross not having fine, cotton-like feathering, they are considered less likely to strangle the brooding chicks with their luxuriant feathers. Personally, I have hatched many chicks under pure Silkies and never ever had any losses caused in such a way – it is, however, perhaps a thought worthy of note.