There are some truly striking British breeds available. However, the Sussex, Dorking, and Orpington win favour with me when it comes to naming my all time favourite three “Best of British” breeds.

Although all three aforementioned breeds have several standardised options, I think certain colours represent breeds at their best, with the desirable “type” and all other attributes firmly fixed in place. To give an example, if someone mentions the Sussex fowl, I instantly think of a Light Sussex. The same as with a Dorking fowl, I think of the Silver-Grey; or Orpington, I think of the Buff variety.

The Sussex Fowl is an ancient British breed which dates back to 1845 (known then as “Kent Fowls.”) The original variety was the Speckled Sussex, with a very attractive tri-coloured pattern consisting of a dark brown body with white and black tipped feathers. Other varieties include the Buff (a gingery coloured body with black neck hackles, flights, and tail), the Light (white body with

black neck hackles, flights, and tail), the Silver (black with silver lacing to the feathers), the Red (similar to Rhode Island Reds, but with more pronounced black in the neck, wings and tail), the Brown (same colouring as a Red Dorking/Welsummer), and the recently standardised “Coronation” Sussex, which is a blue version of the Light Sussex (all the black parts are altered to blue).

The Light Sussex has always been the most popular Sussex variety and is very attractive, particularly when viewed on the range. Good specimens, which possess the correct size, meat-to-bone ratio, shape, markings and all-round general conformation are still difficult to come by. There are lots of “okay” specimens out there, but once you have observed top quality stock, it is very difficult to settle for anything less.

There are many different forms of Light Sussex in the UK. Starting at the top, there are the exhibition specimens with their wonderful “brick shape” rectangular type, size, and superb markings; below them are the average specimens which don’t quite cut it in the show pen but aren’t necessarily brilliant layers. Then we have the strains which look very similar to these but are highly selected for their utility attributes. Such bloodlines can be difficult to locate nowadays. At the bottom is the Sussex Star, a recently developed hybrid based on the Light Sussex, which has poor body size and markings, with its only saving grace being the ability to produce good egg numbers. However, such specimens should not be regarded as Light Sussex, nor should they be crossed into existing lines.

The Sussex Breed has a good following and can boast having one of the oldest breed clubs in the UK. The colour varieties come in and out of fashion but are supported by a handful of dedicated breeders. The Light Sussex, in my view, will always epitomize the breed, and I believe, will remain the most popular Sussex colour. 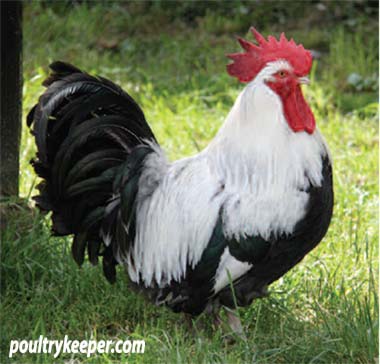 The Dorking Fowl is considered Britain’s oldest breed. There are five standardized colours: The Silver-Grey (females are very pretty, with salmon breasts, silver neck hackles, and Grey “stippled” backs. Males are distinctly black, with white neck and saddle hackle, shoulder and wing bay), the Dark (males are very similar to the Silver-Grey but with the addition of black striping in the neck and saddle hackle as well as shoulder feathers. Females too are similar to the Silver-Grey but with black in their neck hackles and back feathers, along with slight black tipping to the breast feathers), the Cuckoo (very similar in colour to Cuckoo Marans), The White (self white), and the Red (similar to Welsummers but with darker Mahogany tones – particularly visible in the male).

The Dorking Fowl is a five-toed breed, and all varieties of standard colours are required to have five toes. The rules for comb type however, differ according to the respective variety. The Silver-Grey and Red have a single comb; the Cuckoo and White have a rose comb, whereas the Dark is allowed to have either a single or a rose comb.

It would be a fair assessment to say that the Silver-Greys are the best variety to represent the Dorking breed in terms of shape and overall conformation. There aren’t many exemplary specimens out there at present, with the best being in the hands of a few dedicated breeders.

The Dorking fowl served a purpose for a long time on these shores as a dual-quality fowl, having the ability to produce a good number of eggs as well as having a good carcass size, and meat-to-bone ratio. However, with the introduction of modern meat and egg production methods, the Dorking has lost its status as a meat bird, perhaps rightfully so, as its striking plumage, particularly the Silver-Grey, deserves to be savored rather than used for the table.

Although the Dorking Club is well supported, not many members keep all five colours, with few, if any keeping the Cuckoo variety. I have observed the odd good specimen in the available colours, but none quite as magnificent as the Silver- Grey to date. 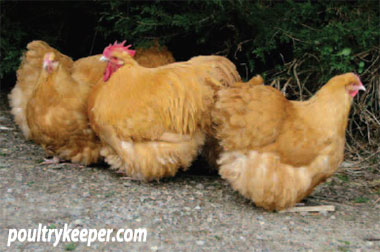 Developed by William Cook of Orpington, Kent, the Black was the first variety of Orpington to surface as early as 1866; he then developed the White, and later the Buff in 1894. There are four standardized colours, and these include the Black (self black fowl with beetle-green sheen), the White (self white fowl), the Buff (self, ginger/buff ), and the Blue (females are mid-blue with darker lacing to the feathers, males have similar lacing on the breast and thighs but display darker feathers in the neck, shoulder, back and saddle areas).

The most popular colour of Orpington, without question, is the Buff variety, perhaps because of its striking colour tone of gingery-buff feathers, combined with white legs and red comb and face. 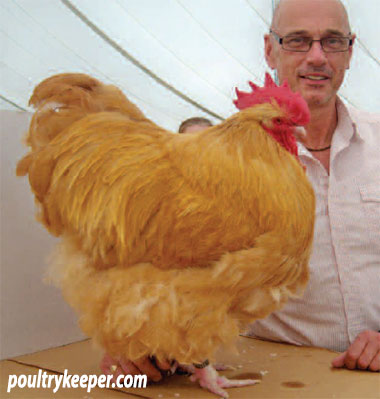 Orpingtons are huge feathery fowl and their size is most attractive. This makes them popular among breeders and newcomers alike, and those with good strains often cannot supply the demand for stock and eggs here in the UK.

In my view, the Buffs will always be the most popular colour of Orpingtons and breeders regard them as the epitome of Orpington type.

There are differing strains of Buff Orpingtons over here. There is the old British variety, as kept by HRH the late Queen Mother, and a few other breeders (these have a particular stamp in terms of colour, comb, feather, and height of leg). In what I would regard as the “old” strains of Buffs, it is possible to see an inch or so of leg, particularly in the males. They tend to be a little darker than many modern specimens, and to me are instantly distinguishable from such lines. 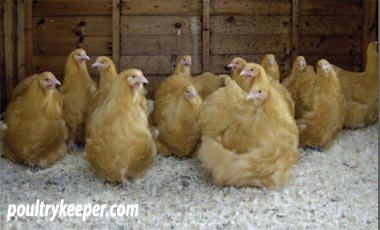 The modern Buffs have had continental stock crossed in, which has led to a lightening of the body colour – what you would possibly describe as more of a “blonde” Buff. The combs also tend to be smaller, and feathering is certainly more profuse, with many breeders preferring only to be able to see the bird’s toes, rather than have any leg on display.

No doubt opinions will continue to vary among breeders and judges of the actual type and body colour of the Buffs, which in my view allows for healthy competition, and a bit of genetic diversity.

This chicken breeds page covers every breed in the British Poultry Standards.