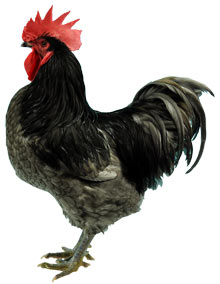 Uses: Utility – meat / conservation.
Eggs: 150-170 tinted or brown.
Origin: North America.
Weight: Cock: 5.9Kg, Hen: 4.55Kg.
Bantam: Cock: 1.74Kg. Hen: 1.13Kg
Colours: Black, Blue, and White.
Useful to Know: They are the World’s largest chicken breed and need a lot of space to be raised successfully but cannot fly so low fencing is acceptable. They are a friendly breed despite their size. Their feeding costs are higher than other breeds and the correct nutrition is essential for them to develop correctly.
Photo: A blue Jersey Giant.

Jersey Giant chickens originate from Jobstown, in New Jersey, North America where brothers John and Thomas Black created them from Black Javas crossed with Black Langshans and Indian Game to increase their size sometime during the 1870’s. The Blacks supplied capons (castrated males) to the restaurant trade. The original birds were black and exceptionally heavy, weighing They are believed to have 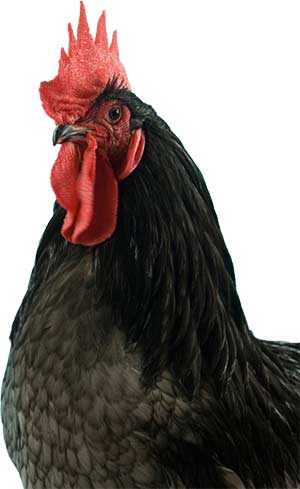 The Jersey Giant was imported into Great Britain by Captain Jones and his wife in 1921 although with their elevated rearing costs and the table poultry market in Europe not favouring a yellow-skinned bird, they weren’t adopted readily so have remained a minority breed to this day. Currently, there are few breeders and the Jersey Giant is in need of more people keeping them.

In 1890’s “Jersey Blues” entered the American Standards for a short time. These were a completely separate breed that became extinct sometime in the early 1900’s. They were lighter and with an 80 year gap before the creation of the Blue Jersey Giant are believed to be unrelated.

The main consideration when keeping Jersey Giants is their size! They need a reasonably large area in which to run and housing needs to be scaled up accordingly. Breeders prefer to use converted garden sheds in the same way you would for Turkeys. Giant’s can’t fly, so low fencing around their run is a possibility, although they still need to be kept safe from predators.

Nutrition is crucial when raising Jersey Giants: Being a large bird, they also have a large appetite! Cutting corners, such as feeding lower costing wheat will cause growth and health problems because of the lower protein levels.
Overall, they are gentle Giants that make good hardy pets that rarely squabble and are reasonably productive in the egg department.

Due to their large size, growth problems can occur without adequate nutrition.