The Poland is recognised instantly by its massive crest, the exhibition Poland is truly a sight to behold. Sprightly and erect, birds have a fairly long body, similar to a long ‘u’ with a full neat tail carried somewhat low. There are some diseases that are common in Poland chickens. 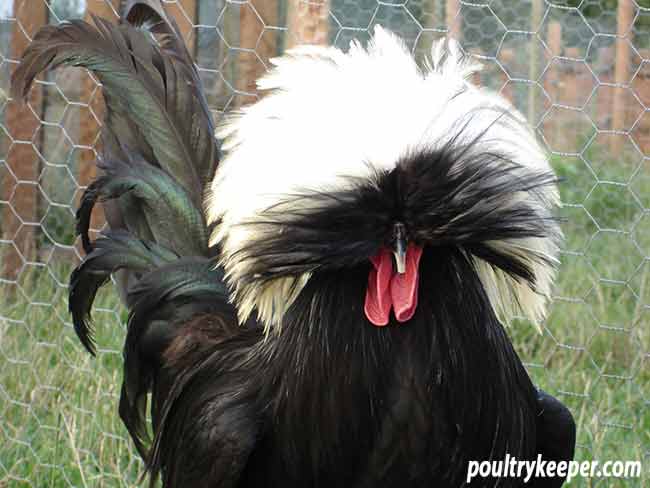 Water on the brain.

This is a particular problem with, although not limited to, crested breeds and is often mistaken for Marek’s disease. An infection in the enlarged cranial cavity produces fluid which in turn presses on the brain. Symptoms include walking backwards and falling over. The bird may spin around in circles then suddenly recover, much to the misguided amusement of the keeper.

Treatment is simple and effective: isolate the bird and administer a liquid feed (pellets ground up with water) via a large syringe directly into the mouth at regular (two to four hour) intervals during the day, with the last feed at night. An antibiotic preparation needs to be prescribed by your vet and injected into the breast muscle along with an anti inflammatory drug (ask your vet to show you how if you are unsure) to reduce the swelling and clear up the infection. You may have to continue treatment for up to four weeks in mild cases however severe cases should be euthanized if there is no marked improvement after one week or if the bird is in considerable distress.

Caused by the staphylococcus bacterium which is found normally on the skin, entry is via a wound as the bird lands and damages the foot pad. High perches have been blamed, but some lines of Polands may be predisposed to the infection and it may be passed on through the egg. The infected foot will fill with pus and become inflamed and painful and severe cases will rupture through the top of the foot.

Symptoms: Lameness, Inflamed hot foot, Abscess may form with a black scab on the foot pad. 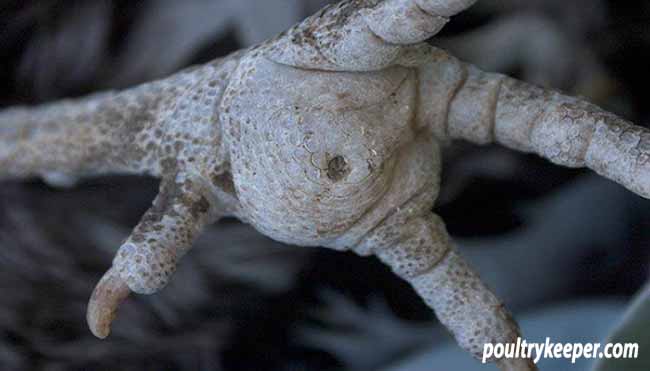 Treatment: It is best to consult your vet unless you are experienced, as you will need to administer oral or injectable antibiotics to treat the infection. If you are going to treat the condition yourself, then you will need to begin by soaking the foot in an antiseptic solution to soften the plug and reduce the chance of further damage and additional infection. Wear gloves at all times as the staphylococcus bacteria can cause infection in humans.

Prevention: Good sanitation is essential. Ensure perches are smooth and rounded and not too far from the floor. Do not breed from those parents that have suffered the condition as the infection may be transmissible through the egg.

These are most often seen when a feather grows down into the eye, although other causes include pokes, scratches and insect bites in and around the area.

Infections may also cause trauma for example sinusitis and mycoplasma where swollen tissue presses on the eyeball. Antibiotic eye drops are helpful although may be difficult to administer as the third eyelid (nictitating membrane) gets in the way and a wax based animal eye balm which can be prescribed by a vet is a better alternative.

An excess of ammonia in a house that has not been cleared out for a while will also cause eye problems as well as respiratory difficulties, which in turn can cause the cornea to become opaque. Certain strains of the Marek’s virus will also cause ‘grey eye’ and you should look to see if any other symptoms are present.

Milk is often used as an eye wash as it has been reported that the protein strands catch and hold many viral agents. It has long been used by both poultry breeders and by chrysanthemum growers when taking cuttings.

A dark brown mite which lives on the body of the bird and is often referred to as Crest Mite in crested breeds such as Polands.

It is similar in appearance to red mite but lives its entire life on the bird completing its life cycle in less than a week, so infestation is rapid and can often be seen in clumps, resulting in anaemia and death.

Infested birds will scratch and may cause permanent damage to their eyes if the bird is particularly irritated by the mites. Unlike red mite, Crest mite can actually increase in numbers during cooler periods of the year making them a pest towards the beginning and end of the year, which is when the exhibition season is in full swing.

You will notice the mites crawling across the skin of birds and these are usually the ones which will run up your arms when handling your chickens.

Birds will be depressed, pale in face comb and wattles. Egg production will be suppressed. Head scratching. Severe infestations can be lethal, brown mites are visible

The birds themselves should be dusted with a louse killer which should be applied in accordance with the directions for use, directly onto the birds and in particular with crested breeds a small amount should be applied into the ear canal with a cotton bud as the mites will hide here and soon multiply. Reapply within five to seven days.

Re-infestation is unfortunately common, but you can use, if prescribed by a vet, preparations which have a residual effect on the feathers for up to four weeks such as ivermectin.

Prevention: Reduce access by wild birds as this is the main vector. Powder exhibition birds before and after a show. If you have taped up crests prior to exhibition, take them down and check every 4-5 days.

Unfortunately common as many birds are kept for exhibition and not allowed free range, trim regularly to prevent crossing and problems eating.

2 Responses to "Diseases Common to Polands"